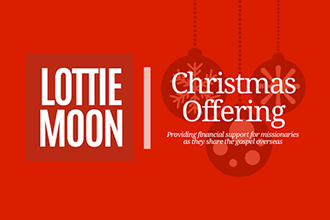 Lottie Moon Christmas Offering
https://www.imb.org/pray/week-of-prayer/
Lottie Moon – the namesake of the international missions offering – has become something of a legend to us. But in her time Lottie was anything but an untouchable hero. In fact, she was like today’s missionaries. She was a hard-working, deep-loving Southern Baptist who labored tirelessly so her people group could know Jesus.Why was the offering named for this early China missionary? Throughout her career, Lottie Moon wrote numerous letters home, urging Southern Baptists to greater missions involvement and support. One of those letters triggered Southern Baptists’ first Christmas offering for international missions – enough to send three new missionaries to China.

Invite a friend to watch our livestream!

Just type in their email address below and we'll let them know how to watch!

Want to invite a friend to watch our livestream?